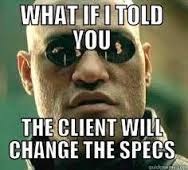 Effective project management is essential for any organization undertaking a change initiative and especially for software development projects. I recently worked for a small family-owned organization that developed cost management and estimating software. For the sake of this post, I will call the organization No Worries. No Worries had a few key clients that purchased the full suite of the cost management software at a lofty price. The business relationship that was built between No Worries and the clients was relatively informal. The first mistake that I believe No Worries made was to not implement a change control system for the project. This opened up an avenue for ongoing scope creep and no process to manage the changes. Whenever a client wanted to add a new feature to the already customized software they just called the IT Director and they discussed it over the phone and the IT Director would reluctantly discuss it with the Product Development Manager and they would proceed to move forward without any requirements or formal requests to satisfy the needs of the client. I observed this happen over a period of 5 months. Each time the undocumented scope change was requested the IT Director would reluctantly succumb to the client’s wishes for fear of losing a major account and loss of revenue for the organization. The No Worries organization would have project meetings amongst themselves and complain about the losses they were incurring from extending the work of the development resources. No Worries had recently hired a project manager to help manage the project and reduce the rising scope creep. The project manager was very capable of performing the role of PM. However, the new project manager was wise and observed the culture and politics of the organization. She had to tread lightly with the clients and gradually implement the needed changes to the administration and control of the project. Over the 5 month period that I observed this scope creep the delivery and implementation date was a moving target along with the feature requirements for the product. The original product delivery date was February of that year (the project start date was in March of the previous year). By August, the product was not delivered and there was no end in sight because of the continued scope creep and the inability to implement a change control process this late in the process. I understand that avoiding scope creep is not possible, however managing it and controlling it to reduce some of the pain is possible, if the project manager and upper management follow a few guidelines as identified below: (Portny et al. 2008)

I believe that the new project manager did a good job trying to implement change control processes after the project was underway, also taking into consideration the culture and politics of the organization made it difficult to implement change without risking losing the clients business. I left the organization in August (after 1 year) and I heard that the product was finally delivered 1 year after the scheduled delivery date. If I were managing the project I would have aligned with key leadership in the organization and shown them the ROI of implementing a change management process that would benefit the client as well as the organization. I would also provide reports to summarize the recommended changes with dates and their impact (Portny et al. 2008). Managing and controlling a project is important to the success of a project and managing scope creep can help ensure that project deliverables remain relevant (Greer 2010).

Blogs I posted to: